What They Say:
Unemployed degenerate Kaiji Ito spent his time drinking, gambling, and racking up bills, and was sure that his life had hit rock bottom. Then that bottom fell out when Endo the Loan Shark arrived to inform him of a friend’s default on a loan that Kaiji foolishly co-signed, making Kaiji responsible for a soul-crushing 3,000,000 yen! But there is one possible way out; if Kaiji goes to a secret gambling ship and plays successfully for one night, his debt could be absolved. It’s a trick, of course, but what choice does Kaiji have?

Trapped into playing a series of increasingly ruthless contests that are hopelessly rigged against the players, Kaiji finds himself a pawn in a competition where the game pieces aren’t expected to survive… and the real players are all actively betting against Kaiji!

The Review:
Audio:
The audio presentation for this release brings us the original Japanese language in stereo only, which is encoded using the DTS-HD MA lossless codec. The series is one that while it does have some action from time to time, and it’s well utilized, for the most part, it’s really all about the dialogue. The action elements are more the overacting in some ways because of the antics that the cast gets up to and it works well in handling the chaos they create but also the varying levels of dialogue – again, largely with overreactions. The intensity of the dialogue is well-matched with how the score for this series goes in that it helps to elevate and complement everything so that even the basic stereo presentation really makes a huge difference. The encoding works well as everything is placed properly and there’s a clean and clear aspect to it but it’s not a track that’s going to stretch much in either language.

Video:
Originally airing in 2007 and 2011, the transfer for this TV series is presented in its original aspect ratio of 1.78:1 in 1080p using the AVC codec. The fifty-two episode run is spread over three discs with an even split across them. Animated by Madhouse, the show is one that captures the look of the manga well as it goes for the more angular and blocky look that dominates the source material. Madhouse is usually known more for their lavish productions but they work a number of these and other “simple” shows as well. There are some moments of really nice fluidity to the animation but a good chunk of it is just dialogue so it can manage its budget really well. There are a lot of fun visual cues brought into it at times to keep it active and the talents of the staff are well-used to take this up a level from something that might be a bit more basic in other hands..

Packaging:
The packaging for this release comes in a slightly thicker than normal standard-sized Blu-ray case that has two hinges so that it can hold four of the six discs that cover the run of episodes. The front cover uses the familiar key visual with Kaiji in the lower half looking serious while money floats around him and the looming threat behind him and above that’s just shadowed enough to work and raise some curiosity about the whole thing. The back cover has a blending piece that features several of th epoeple he has to deal with along the way along the top while there are two columns of shots from the show that are too small to really show off all that much. The summary of the premise covers the basics right with an easy-to-read design and we also get a good listing of the extras. The production credits fill out the bottom a bit as does a solid and accurate technical grid so you know exactly how the show is put together. No show-related inserts are included nor is there a reversible cover.

Extras:
The only extras included here are the clean versions of the closing sequences.

Content: (please note that content portions of a review may contain spoilers)
One of the more popular manga and anime properties out there that just doesn’t resonate with much of “anime” fandom, Kaiji has finally made its way to home video here. The show had two two-cour seasons previous back in 2007 and 2011 and that brings us fifty-two episodes of goodness here to take in. THe original manga is from Nobuyuki Fukumoto which began in 1996 and has seventy-five volumes out in Japan so far – and is still going as serialized in Weekly Young Magazine. It’s a solid crossover piece with non-manga fans keeping up with it and it resulted in four live-action films and a spin-off anime, Mr. Tonegawa, which Sentai Filmworks licensed and released previously in bilingual form. We don’t get a dub here as there’s just too much material and I suspect that as good as Mr. Tonegawa did, it showed there just isn’t the market for the dub/cost equation here.

Kaiji is the kind of series that I really admit to struggling with in the best way to review it because it doesn’t lend itself well to that, especially with the number of episodes there are here. It’s a very episodic series working under a larger overall arc that deals with the young man who really can’t help but sinking further and further into debt. The general premise is that it opens with him having his luck go so badly that he finds out he owes a huge debt to a loan shark that he guaranteed with a co-work that now needs to be paid up. Since he can’t do it, he finds himself reluctantly forced into the other option given, which is to board the ship Espoir where he can engage in gambling there to survive and live another day. The loan shark basically sees it as a way of getting rid of a couple of problems and never expects that Kaiji will be back.

That puts Kaiji into a series of events where it’s all sorts of games of chance that are being played. From steel beam crossings that are electrified to simpler card games whose stakes change wildly the further it goes. There are various locations that the whole thing ends up in Kaiji’s connected to so much of this in his effort to survive and win that the tension is incredibly intense. Kaiji’s not the type that just blusters his way into things and works by charisma. This wasn’t even something he was doing himself initially since it was his co-worker. He’s thrust into this against his will and is just doing his best to survive, manage his anger so that he doesn’t make things worse, and cope with what kind of people populate the locations, from the ship Espoir to the Starside Hotel and more. And while he may have an idea of how to play most of the games, there are always so many variations and twists to it that it invariably puts him in a worse spot at times, making him struggle all the more to get out of this ever-increasing debt.

The thrust of the series is the way it pits the characters against each other to win, to gain the stars they need to survive from each other, and the kinds of things they do when not playing the actual game. Betrayals are common, trust is hard to have, and Kaiji is someone who has an almost unnatural ability to manage this whole situation – but again, not without being tense as hell the whole time. But at the same time, with it running as many episodes as it does, the pacing can feel a bit slow and drawn out. It’s not a series that you can really binge well, which is why I’ve watched it over a couple of weeks and just made it through the first cour of it. It’s a lot to take in but very worthwhile. But it’s also one that you really want to spread out unless binging really does click for you. It didn’t for me in that way as it felt like binging Case Closed as some of the structural design just becomes so obvious quickly.

In Summary:
Having seen the Mr. Tonegawa series previously, I had a general idea what to expect here. Kaiji is a pretty fun show in small doses to dig into the wild and weird kinds of things that they come up with for the gambling matches. There’s a really interesting cast of characters that are introduced and some seriously intense situations that they’re put through. This set is an amazing deal with how much material there is here and that fans of Kaiji can get everything all at once like this and in as good of a quality as it is. While I know why it couldn’t warrant a dub, I do wish it would have had one as it’s a show that a good cast would have an amazing time working through and playing. Kaiji’s a pretty unique show that may be off-putting at first because of its visual design but it can be a pretty addictive watch.

Content Grade: B
Audio Grade: B+
Video Grade: A
Packaging Grade: B
Menu Grade: B
Extras Grade: B- 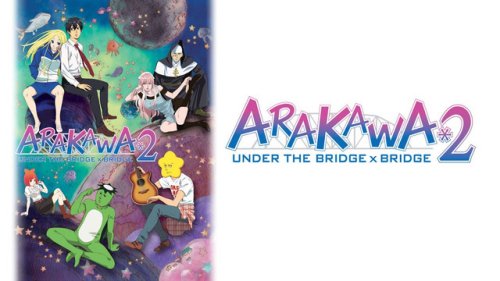 Funimation Streams Both ‘Arakawa Under the Bridge’ Anime Series