What they say:
The  Tower of Babel looms large at the center of the world on the continent of Babel, a land where magic is used to create Alchemy.  When   Babel is possessed by a giant snake known as  Destrus, a  group of  Alchemists summon an ordinary girl from Earth named Kasumi,   who they believe is a   “phantom of light” who will free  Babel from Destrus and the dark mages ravaging the land. Can Kasumi and the alchemists defeat Destrus and save the world?

The Review:
Content: (Please note that content portions of a review may contain spoilers)
“For Whom the Alchemist Exists” is an anime film based on a game of the same name that hit theaters in 2019. Directed by Shinji Kawamori and starring Inori Minase and Ryota Ohsaka, the project has a lot of big names attached. One thing to be said about big names, though, is that their filmographies can be filled with duds along with their masterpieces. Unfortunately, “For Whom the Alchemist Exists” falls into the former category.

The film opens with a monologue with a quick recap on the history of Babel and how the creation of alchemy through magic threw the world into chaos. Funnily enough, magic and alchemy are hardly mentioned in this film after that. The story truly begins when a village is attacked by dark mages under the control of Destrus, who plans to decimate the world. That’s when our heroes arrive, notably Edgar L. Leonhart, to drive the dark mages away. However, the phantoms summoned to fight the dark mages are presumably destroyed and the rest of the population is forced to flee or fall victim to the dark magic.

Immediately, the artwork is pretty good. Satelight has prior experience with these kinds of foreign worlds (see Log Horizon, Fairy Tail which they co-produced with A-1 Pictures, and much of the Macross franchise).

The action isn’t too bad either, though there is some awkward 3D integration, and the action often switches between 2D and 3D character models. But make no mistake, the backgrounds in particular are outright gorgeous and the world’s aesthetics are very fitting for a title based on a video game.

That brings us to our first problem. The film runs just shy of two hours and doesn’t have nearly enough time to explore all of its vast land. As often is the case with videogame adaptations, it’s a world that’s better explored yourself. After all, the film only takes place in a handful of locations. It’s a beautiful but hollow setting.

Much of that could be forgiven if the story was up to par, however. But the story often falls flat. Character motivations are shallow, unrelatable, or do not make much sense, if any. The protagonist, Kasumi Nagasaka, an ordinary girl from Japan, and the one chosen to free Babel as the alchemist of light, is a walking empty slate. The first thing we know is that she has a strained relationship with her mother who constantly berates her for her lack of notable talent (though she does know how to cook and how to act). There is some sharp directing here, though.

This shot of the physical distance between them is one of the highlights of the opening act and it’s a shame the film doesn’t incorporate more visual prowess like this later in the runtime. They’re facing away from each other as they each have their own literal and figurative visions. The dialogue here is also well done, keeping exchanges to a minimum to emphasize the awkwardness of the relationship.

After appearing in Babel, she wins the hearts of all the people there by cooking a single time for them. Apparently, that is all it takes to win over the hearts of the populace. That’s when they’re all attacked by the dark mages and phantoms from the beginning of the film who got corrupted with Destrus’ dark magic. Kasumi miraculously awakens her powers in time to save everyone and drive the corrupted phantoms away, at least for the moment. Realizing they cannot avoid the problem any longer, they head to the Tower of Babel to eliminate Destrus once and for all. They meet a the heroes from the beginning along the way and while Kasumi is eavesdropping they let it slip that if she destroys Destrus she will disappear. This causes some major concern among her and the heroes and that’s when the corrupted phantoms from before reappear and try to corrupt Kasumi herself with Destrus’ dark magic. She almost falls victim to it until her friend actually absorbs the dark magic from her to free her. It wasn’t a passionate plea telling her to reject the dark side because she has people who care about her or even telling her that we all have darkness within ourselves and accepting it is part of growing. It was her reaching into the crystal where Kasumi was and taking that darkness onto herself. It gives a reason for Kasumi to fight Destrus so she can free her friend but it’s thematically weak.

This gives her a will of her own, though, which is what we need to move the story, so to Destrus they go, and Kasumi is able to free the phantoms and restore them to their more heroic original forms again, including the master of one of the heroes who escaped in the beginning of the film.

The last 20 minutes of the movie are mostly dedicated to this large climactic action scene where they all work to defeat Destrus. It actually looks pretty good except for some more janky CG integration. This is when Kasumi learns about why Destrus wanted to destroy Babel. It was because he hated humans.  Why did he hate humans? Apparently, years ago they performed some kind of ritual on him as a baby. Oh, and Kasumi was a part of it. She had actually been to Babel before when she fell from a playground structure and hit her head. How she was summoned as a phantom nor how she was old enough to learn and perform such a ritual when she was only a child when she fell is never explained. But small details aside, there’s no reason why Destrus decided to wait on destroying humanity. The movie just poofs from A to B where Destrus just appears to conquer Babel and then stew in his hatred for a long time until Kasumi conveniently shows up and uses her power to somehow turn him into a baby again.

The film ends with those in Babel beginning to rebuild and Kasumi reuniting with her mother back in Japan. Another problem with the writing is with the thin relationship building. There’s no payoff to this reunion because there’s no time to spend on it. The only scene we get which might have a little impact is when the mother sees her daughter’s comatose body and then finds a picture with the two of them.  Other than that, there are no real-world consequences. There is something between one of the phantoms and one of the heroes who refers to the phantom as “master,” but that relationship is never explained at all.  In fact, we know nothing about any of the other heroes, even Edgar, the only other character besides Kasumi for whom I could actually find a casting credit.

Overall, this film runs into the same problems that befall so many other adaptations of videogames. It’s another title that falls into the “pretty art, bad story” bucket.

In  summary:
“For Whom the Alchemist Exists” is a beautifully crafted world best explored yourself as a player of the game, without a strong story to match. If you’re looking for some pretty background art, this film has you covered. Otherwise, pass. 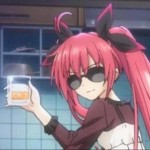 Dan has loved writing ever since he was a child. He even went to school to get some college degrees in media writing. He probably spends too much time on social media for his own good and aside from reviews writes in-depth features and analysis on anime at his blog. His hair color of choice on waifus is silver.