The Night Witches – the all-female night-bomber units of the Soviet Union.

What They Say:
As the German Army smashes deep into the Soviet Union and the defenders of the Motherland retreat in disarray, a new squadron arrives at a Russian forward airbase. Like all night bomber units, they will risk fiery death flying obsolete biplanes against the invader–but unlike the rest, these pilots and navigators are women. In the lethal skies above the Eastern Front, they will become a legend–known to friend and foe alike as the Night Witches.

With casualties mounting and the conflict devouring more and more of her comrades, Lieutenant Anna Kharkova quickly grows from a naive teenager to a hardened combat veteran. The Nazi foe is bad enough, but the terrifying power of her country’s secret police makes death in battle almost preferable. Badly wounded and exiled from her own people, Anna begins an odyssey that will take her from the killing fields of World War II to the horrific Soviet punishment camps–and at the top of the world, high above the freezing Arctic Ocean, this Night Witch finds she has one last card to play.

Content: (please note that content portions of a review may contain spoilers):
History, and war chronicles in particular, tend to omit or diminish the contributions of women. In recent years, there’s been a push to bring to light the forgotten stories of women in the military. Thus, we have The Night Witches, a graphic novel about female Soviet pilots who fought the Germans in World War II. The Night Witches, as Dead Reckoning Press presents it, is a collection of three 3-chapter graphic novels, all of which focus on the Soviet pilot Anna Kharkova. Like many historical works set to this era, Anna’s experiences aren’t based off those of a single person but are a compilation of the exploits of several individuals.

A word of warning. The Night Witches has no rating, but it is definitely in the 18+ category. The creators have not shied from showing war’s awfulness, so the pages contain graphic depictions of violence, disembowelment, and rape.

And a slightly different word of caution. The graphic novel offers no background for what’s happening. It simply begins with a German squad inside Russian borders, and Anna and her fellow female newbies arriving on a Soviet air base. Except for a couple date stamps, the text is entirely dialogue with a bit of internal monologue. Meaning we are limited to the knowledge and viewpoints of the characters. Thus, readers are expected to know who’s invading whom, the toll to date, and the political and social forces at work as a matter of course. They’re also expected to know war slang as well as weapons by nickname and name, and only rarely does the narrative hint at the broader scope of the conflict.

In short, if you’re not a World War II nerd, this graphic novel probably isn’t the best place to start learning about Soviet female pilots. However, if you’ve got at least some history under your belt, The Night Witches will bring to light lesser-known facets on historical events.

The first of the three works, The Night Witches, focuses on the parallel journeys of two new recruits, the German infantryman Kurt Graf and the Russian pilot Anna Kharkova. Although the two don’t meet until the third chapter, they’re constantly interacting throughout as Anna’s bomber regiment is tasked with harassing the German forces of which Kurt’s squad is a part. On Anna’s side, the creators do a pretty good job depicting the prejudices against the women and how their ingenuity allows them to hold their own despite their woefully obsolete equipment. The storytelling’s much more muddled on Kurt’s side. His squad members are introduced as a lengthy list of names applied to an indistinguishable group of men. When Kurt interacts with squad individuals during the story’s progression, I can’t recall who’s who. But while the German cast’s confusing and largely forgettable, the horrors and atrocities Kurt witnesses are not.

The second work, Motherland, begins with a now battle-hardened Anna transferring from her bomber unit to a fighter squad just before the Battle of Kursk. The Soviet strategy boils down to throwing soldiers at the Germans to overwhelm them by numbers, and that’s clearly illustrated by the pitifully young and untrained pilots assigned to Anna and the arrogant commissars who bear no compunction about sending poorly equipped soldiers to certain death. There is a lot of discussion about different aircraft in this arc, and because my knowledge of German and Russian planes is nil, most of this went over my head. Additionally, action in the massive ambush on Anna’s squad is very difficult to follow, although the illustrations do convey the battle’s epic scope.

The final installment, The Fall and Rise of Anna Kharkova, “lacks any direct historical precedent” (as admitted by the writer), and the latter half of its third chapter “very nearly qualifies as fantasy.” Although individual Russians certainly suffered as prisoners of war, stood before counterintelligence tribunals, supported North Koreans in the Korean War, and got condemned to punishment camps, it’s highly unlikely anyone experienced them all. In addition, Anna’s final ploy, though inspiring, is beyond the realm of possibility. What these chapters do illustrate, however, is the Soviet Union’s post-war activities and the evolution of their aircraft technology.

While I appreciate how this book celebrates the achievements of women in World War II and the Soviet Union, I wasn’t enamored of Anna as a heroine. She is depicted as big chested and adorably petite, and she’s the sole blonde among a cast of drab women. She winds up lover to her superior officer in The Night Witches, similarly catches the eye of her superior officer in Motherland, and despite suffering multiple injuries in a crash behind enemy lines, charms the guy attending her in the POW hospital with her beauty. (And none of these supposedly romantic encounters have the least bit of chemistry.) Having this Barbie doll as the female elite of elites makes her less a figure of inspiration for young girls and more of a male fantasy.

Extras include Afterword and a collection of sketches.

In Summary
The Night Witches is the fictional account of a female Soviet pilot during World War II. This book is not fodder for the lighthearted; it’s graphic in its depiction of World War II atrocities and the brutalities of the Soviet government. While the conclusion is improbable, the first two-thirds of the book is grounded in actual events and pays tribute to women’s achievements in the face of discrimination and incompetent leadership.

Content Grade: B
Art Grade: B
Packaging Grade: A- 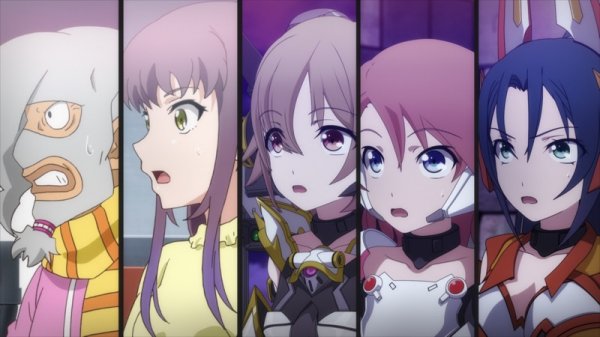