Frankly put, Katanagatari is by far one of the most unique anime I’ve set my eyes on. What drew me into this masterpiece of a Japanese cultural saga at face value was its unique art style. While it is almost exactly ten years since the last episode aired, I have to admit I initially never knew such an anime existed, nor did I know of the original light novel adaptation by the legendary Nisio Isin. Until this year, where I found myself having more free time than usual.

Katanagatari tells the tale of Yasuri Shichika, the 7th-generation head of the Koto Ryu clan and user of the swordless martial technique of the same name. He lives in isolation on an island with his elder sister Yasuri Nanami due to his father’s past deeds. One day, this quiet isolation is dramatically interrupted by the introduction of Togame, a self-proclaimed strategist for the Shogunate, who seeks out the head of the Koto Ryu clan in order to find twelve legendary swords made by the equally legendary blacksmith Shikizaki Kiki.

After a series of bizarre and quite frankly hilarious events in the first episode, they set off across multiple islands, forests, and towns of feudal Japan to collect the other 11 swords with the first in tow.

Never has a first episode captured me quite as much as the first episode of Katanagatari did. The art style, pacing, and dialogue are strong factors that help justify this statement as they succeed in flexing the literary muscles of Nisio Isin in a manner the novels simply do not. If you’re familiar with other works of the author, then you’ll know the dialogue plays a strong role in all his other works such as the Monogatari series, and Katanagatari is no different.

In the first episode alone, the first meeting between Togame and the Yasuri siblings, sees Togame blow off almost 15 minutes of exposition explaining the political and historical state of the anime’s fictional feudal Japan. This sort of introduction can easily drive viewers with a short attention span away from the anime. Yet, I’ve never seen exposition done so well.

While the first few minutes of the anime explain the setting, lead characters, and motivations, the other, albeit more entertaining half of the episode, introduces the anime’s main antagonists. That is the Maniwa Ninja Corps, a group which has the same goal of collecting these swords. The episode also showcases a glimpse of Shichika’s unparalleled combat prowess. So much was shown in the first episode alone, thanks to the anime’s format of twelve 50-minute episodes spread across a year. Each episode is dedicated to a sword in the journey. This replicates the novel’s format of releasing one volume a month.

While the art style and pacing of the anime were what drew me in, what kept me invested the most was the two central characters and their interactions. The complex relationship between Shichika and Togame is undoubtedly one of master and servant (or sword). However, they still very much act like a couple in their mid-twenties. While Shichika gives off an impression of a dull and obedient servant, he’s still very much aware of everything around him. He frequently reflects on his actions and that of others throughout the series and is by far the character that sees the most development.

On the other hand, Togame is a cheerful yet cunning individual whose motives remain unclear for most of the series aside from her primary goal. Nevertheless, their dialogue and hijinks are highly entertaining. Seeing them overcome each hurdle they encounter gets you emotionally attached to them. While the anime includes two strong leads, it also has a slew of other interesting characters. Each episode introduces new unique cast characters as opponents and wielders of the legendary swords. These characters aren’t just your standard antagonists either, as they have their own little stories, background, and motivations attached to them, which is an aspect you won’t see in many anime today.

Aside from the characters and overarching plot, the next best thing about Katanagatari is its stellar production quality. Watching each episode feels like a theatrical experience complete with its own narrator at the start and end of each sitting. The unique character designs and incredible animation from Studio White Fox, akin to stylistic moving paintings, matches wonderfully with its equally unique and excellent soundtrack that beautifully enhances each battle and dramatic moment. What’s more, the dialogue is often matched with multiple frames of Japanese calligraphy almost in a similar manner to that of its counterpart, the Monogatari series. Coupled with the soundtrack, it all fits the highly Japanese nature of the anime.

Katanagatari is also an anime that will surprise the viewer multiple times with its many twists. The most memorable example of this is episode four, which unexpectedly subverts the viewer’s expectations and switches perspective right at the moment of anticipation. While surprising, watching the other perspective was highly entertaining regardless.

As Katanagatari proved to me with each passing episode why it is a great anime, it is not without its faults. Despite the format of the anime, a few parts were still overlooked or brushed over completely, some characters weren’t done justice, and as I mentioned earlier, the amount of dialogue and exposition can prove overwhelming for some viewers. Regardless, the anime went out with a bang. The last episode had a lot of impact and meaning, as every action leading up to the final moments were fully realized.

Needless to say, I wholeheartedly enjoyed my time with Katanagatari. By the end of the anime and the characters’ journey, I was left with a bittersweet feeling of contentment. While the ending wasn’t one I had hoped for personally, it was certainly one that was justified and will stay with me as one of the best pieces of media I experienced this past decade. 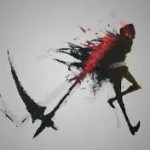