Three Tales to sit by the Fire!

Content: (please note that content portions of a review may contain spoilers):
For the last two years, Mike Mignola has gotten Hellboy fans into the holiday spirit, by providing nice anthologies within a Christmas One-Shot. He invites collaborators, both new and old, in order to tell various tales in the “Mignolaverse” that are either set around the holidays or have some form of connection to either Christmas or New Years. This years one-shot contains great tales from frequent contributors Ben Stenbeck, the brothers Gabriel Ba and Fabio Moon and Tonci Zonjic. The book manages to be open to anyone willing to pick up the issue, but the real treat will be for longtime fans that will recognize certain characters and the legacy that even these contributors have offered to the “Mignolaverse”.

One of the funnier Hellboy tales in a long time, Happy New Year, Ava Galluci opens the book to much delight. Full of frog transformations and some really hilarious moments, this story is the epitome of what a comedic Hellboy story should be. While he’s mostly drawn issues that are fairly serious, Ben Stenbeck does some great work, invoking some of the best segments that Mignola has ever done, as well some of the comedic stories that Kevin Knowlan has penciled. Once we get to Lost Ones, we’re transported to the same vein of B.P.R.D. Vampire with Gabriel Ba and Fabio Moon’s contribution. This segment is just as eerie as Vampire was and also is very reminiscent of the fairy folk and the presence they cast over the series. The final story is a solo effort from Tonci Zonjic, who’s efforts in the Lobster Johnson books give a great retro feel and is also a nice little crime story that wraps the issue wonderfully. The Lobster, being a man of very few words, utters my new favorite tagline and some of the hijinks that the criminals get themselves into are some the most ridiculous/best ideas that a Lobster Johnson comic has ever done.

What’s great about this Hellboy Winter Special 2018 is that while every one of these stories is different from one another, they still feel very cohesive, and I don’t mean that just because there’s a shared universe amongst them. While Mignola probably keeps a lot of ideas close to the chest, to see the contributions of the Ba, Moon and Zonjic feel extremely organic, is true to each of these different characters and is rewarding for longtime comic book readers. Again, this is what makes the “Mignolaverse” so invigorating, due to the notion that these books can be a bit of everything. They can make you excited, laugh, and even sometimes cry.

In Summary:
I’ve always been ho-hum on the Hellboy Winter Special in the previous years. They’ve always been pretty good, but never as great as the main series. This is the year that I’m wrong. The Hellboy Winter Special 2018 is a nice way to wrap up a solid year of Hellboy comics, by providing us with a reminder of why I fell in love with these books in the first place. While you’ll get more out of it if you’ve already been a longtime reader, but if you find yourself wanting to find out why these books are charming, do yourself a solid and pick up this Winter Special, cause you won’t regret it! 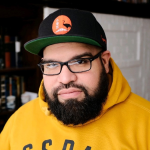 Combined from a healthy mixture of Anime, Cinema, Comic Books and Video Games. Born and raised in the city of Chicago and if he could pilot an EVA unit, he totally would.