A messiah will be found, trained, and brought into play!

What They Say:
When the fallen angel Lucifer starts raising hell down below, Heaven decides that it’s time to start looking for a new savior to keep humanity from succumbing to the lure of Sin. Unfortunately, the seven beautiful angels assigned to the task of finding a new Messiah may not be the best choices.

Their nominal leader, Michael, the Angel of Faith, is plagued by self-doubt. Gabriel, the Angel of Chastity, struggles to defend morality in a costume that’s sure to lead men into Temptation. Metatron (Charity) has a surprising bondage fetish while her sister, Sandalphon (Diligence), has trouble focusing. Uriel (Patience) has bladder control issues and… well, let’s just say that none of them are exactly qualified and with guardian Angels like these, Mankind is almost certain to be doomed!

The Review:
Audio:
The audio presentation brings us the original Japanese language track in stereo along with the English language dub, both of which are encoded using the DTS-HD MA lossless codec. The show has a few outlandish moments where the audio gets to be silly but it’s mostly a lot of dialogue with some fun sound effects and music cues to keep it all moving. It’s something that largely works in a full way with some mild placement here and there and some cute directionality at times that works nicely. But this is not a mix that will stress any system with what it does. The range is well-handled and overall we had no problems with dropouts or distortions during regular playback.

Video:
Originally airing in 2018, the transfer for this TV series is presented in its original aspect ratio of 1.78:1 in 1080p using the AVC codec. The episodes are five minutes each so it all fits easily on one disc. Animated by studio Bridge, the show has a really great look with vibrant colors for the character designs, lots of detail where needed, and good looking backgrounds and a palette that works well to make it stand out well. The show has some really nice animation in places where it’s very fluid and the quality for it is great. The set works with the uncensored version from what was streamed so we get the addition of a few scenes where there are nipples showing as the main difference. I loved the look of the show streaming so I’m definitely very pleased with a much higher bit rate encoding here with what it presents.

Packaging:
The packaging for this release brings us a standard side Blu-ray case with no frills beyond that. The front cover is really nicely done with some mild gold framing while the visual is of all the girls, naked, floating around the logo in the middle. They’re all covered with bits of cloud and fog so it’s amusing obscured but it works really well in that we get a good look at their designs through their faces that does reveal plenty about their personalities in the simplest of forms. The back cover gives us a small circle with the summary of the premise and shows off one of the angels in full form to the left. There are a few fun shots from the show spread around with some tantalizing censoring but also a note that this release us uncensored content, making it more appealing from that alone. The rest has a decent breakdown of the production side of it and the technical grid that makes clear how the set is put together. No show related inserts are included nor is there a reversible cover.

Menu:
The menu design is a busy one as the static image gives us all the girls smooshed together across it – but dressed this time – as they’re laying on a checkerboard floor. There’s a lot of color through the costumes and hair here so this is a very bright and very busy piece. But it’s more so with the navigation along the bottom with fourteen tabs that has the episodes by number and title as well as the languages and extras submenu. It’s just a bit too busy overall even if I love the designs. It does work but it’s so close to being garish that it’s frustrating.

Extras:
The only extra included is a clean version of the closing sequence.

Content: (please note that content portions of a review may contain spoilers)
Spinning off from the Seven Mortal Sins series that I have not seen, the Seven Heavenly Virtues is a twelve-episode short-form series that aired in the winter 2018 season. I had watched it as it aired since I like fanservice and I like short-form works and this was fairly accessible overall. Coming from studio Bridge, the show has a great look and eliminating the censoring from the broadcast version adds a little more sexiness to it all. The broadcast only saw ten of the twelve episodes so we get some new material here with the final two that adds more silliness to the mix. If I have a frustration with this set is that it’s Sentai’s standard method of each episode being its own title in how the disc is set up, which with a short-form series introduces more delays in skipping through episode or trying to get around to different points easily. But, beyond that, it’s a pretty problem-free release.

The premise for the show is simple in that the various angels from above are coming down to Earth in order to find a new Messiah. With Michael now taking over as the leader for the Virtues, she’s sent them to out to try and find one that they each feel individually is right. So we get each episode where they basically meet up with someone and work through the process in their own unique way. This often leads to a lot of fanservice because the costumes are super skimpy and the angels are oblivious to the way they come across since it’s just their natural state overall. The silliness with the fanservice does work well as you can go from one where the breasts are bigger than a beach ball to another where the angel bounces up and down on their potential messiah’s face in a way that would not feel sexual considering the force involved.

The second episode brings us Uriel as she watches over the Messiah Candidate from a distance in the shadows. Of course, she’s anything but in the shadows and everyone can see her (and all her assets) quite plainly, which has him begging people to just ignore her. There are some hilarious ways she believes she’s invisible to him while just being so blatantly obvious as she falls further and further in love with him. With Uriel talking mostly in narration and getting more serious as she realizes she has to do more to support him and train him, it just becomes more and more of a drag for him. But delightfully silly for the viewer.

One of the more amusing ones is the Angel of Charity with Metatron. She’s playing nurse as her candidate is in the hospital and she’s just all nervous in a lot of ways but also highly sexual in how she tries to help him, which we didn’t quite get with the last one to the same degree. She’s also one heck of a klutz and makes situations a lot worse, all in the first minute of the episode and that leave sour candidate in fear of her. At the same time, her attentions are so sexual in nature that he can’t help but to want more, such as when she washes his back with her massive breasts. Metatron just takes it ridiculously far in trying to please him that you can’t help but laugh at it. Then it naturally goes off the rails at the end which just made me laugh more even though i know I shouldn’t.

The broadcast season movies us toward the silliness of the group together, first on the train and then just in some training, was all kinds of wrong in a good way the last time around. Seeing how the angels are working together to create a proper training video for the candidates and that means she has to get everyone on the same page so they can send it to all the candidates is definitely fun. Suffice to say, that’s a lot of sexy angel goodness in front of us getting into the groove by doing things like jumping jacks. And that means each of them gets visual attention from the camera, or at least their breasts do. When it shifts to stretches it’s pure bottom (and front) good goodness once again. Even some from below shots brought into the picture.The warming up phase is utterly delightful to watch from a pure enjoyment of sexuality point of view.

With the two new episodes, there’s some decent fun to be had here overall but it’s the last one that won me over the most. It’s here that we get the angels together playing a game and just having fun where they’re in bathing suits playing with water guns. The amusement over how much skimpier the outfits are is comical but when it’s revealed that one of them has made it so that the water from the guns dissolves clothing? You knew that was going to happen as a way to in. Since they’re often pretty close to naked in a lot of scenes it’s a bit half hearted in how upset they are but it’s the best way to cap off the season with its focus on fanservice in general. It’s silly and sexy and full of the bouncy goodness that you’d expect from a Hobby Japan show.

In Summary:
While I lack the context of the mother series for this it’s also not something that you need. It’s just a bunch of silliness with angels coming to Earth and dealing with largely faceless guys as they look for a new messiah. Each episode focuses on an individual angel until it all comes together toward the end but not for anything serious. It’s straightforward episodic short-form material and it delighted me in simulcast form and I love it even more here. It’s not a great work but it’s the kind of fluffy stuff that’s a great change of pace from the rest. It looks great, has a solid dub to it, and a great looking package. Definitely recommended if you’re looking for this kind of fun and enjoy it like I do. 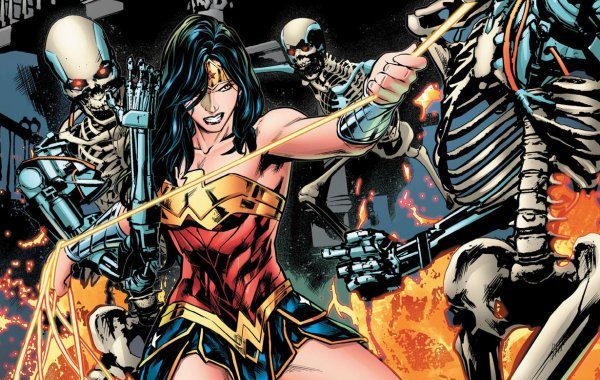