It’s not easy being a middle school girl that has to step up and work in the Space Patrol.

What They Say:
Luluco’s dad has been frozen in a block of ice, and there’s only one way for this middle schooler to pay for the treatment-by taking his place in the Space Patrol! It’s a total pain, until she gets partnered with some perfect crush material, a.k.a. the handsome Nova from outer space. After her hometown of Ogikubo gets sucked into a black hole, it’s up to Luluco and a bunch of weirdos to track it down.

The Review:
Audio:
The audio presentation for this release brings us the original Japanese language track in stereo while the English language dub gets the 5.1 bump, both of which are encoded with the Dolby TrueHD lossless codec. The show works well in both mixes but it’s, in general, a solid stereo design with the action and dialogue that feels the most natural, though the 5.1 mix comes across as a bit louder and with a bit more impact with the bass. The show has a good run of action that moves across the forward soundstage well and with some good depth in a few scenes as well. The dialogue side works similar at times but mostly works a more traditional center channel kind of approach for a lot of it since it’s usually one person going on a lot rather than overlapping conversation. Dialogue is clean and clear throughout and we didn’t have any problems with dropouts or distortions during regular playback.

Video:
Originally airing in 2016, the transfer for this TV series is presented in its original aspect ratio of 1.78:1 in 1080p using the AVC codec. The show runs for thirteen episodes in short form so it all easily fits on one disc with 104 minutes total including all the openings and closings throughout it. Animated by studio Trigger, the series has the kind of hyperactive look that you’d expect with a simpler design for the character that allows for some really fun expressive moments to take shape. Though it looks simple it’s a complicated work with all that it does and those details come through well with a solid look to them free of breakup. The more fluid animated sequences are strong and colors are solid throughout making for a very engaging experience that will delight fans of it. I do wish that it had a marathon session form here since it’s a shorter show with the episode length and you’re moving through the openings and closings pretty quickly because of it.

Packaging:
The packaging for this release comes in a standard sized Blu-ray case that holds the two discs for both formats against the interior walls and it comes with an o-card as well. What’s welcome is that the o-card uses different pieces of artwork from the Japanese release with Luluco getting the o-card cover while Nova gets the case cover. Both have the big pink background and have a different group of supporting characters around them in small form that works really well. The logo drives me nuts as it just doesn’t flow well and it’s practically impossible to make sense of, which some people like but just comes across as horrible design to me. The back cover is cuter with the tagline and shot of Luluco that we get as well as the summary of the premise that breaks it all down easily. The shots from the show may be small but showcase the character designs and goofiness well enough while the technical grid lists the setup of both formats in a clean and easy to read format. While there are no show related inserts with this release we do get artwork on the reverse side that serves up more Luluco and Nova material that’s minimal but cute.

Menu:
Similar to the simple design of the packaging, the menu for this release works the single static image that you’d expect where we get a good image of Luluco in her space patrol uniform along the left side of it. The pink background dominates but it plays well with the color of her costume and the supporting characters. We do get a lot of dead space throughout the menu, perhaps more noticeable on a larger screen, with the logo trying to take up some of it but just looking awful. The navigation strip along the bottom use a simple off-white with black text and a green highlight that works well enough but is just a standard design element. Everything moves smoothly and easily both as a main menu and a pop-up menu so there are no complaints to be had there. Setup is a breeze and it does largely put things into place for the type of show we’re getting, though a wacky series of clips might have been better.

Extras:
The only extra included is a clean version of the closing sequence.

Content: (please note that content portions of a review may contain spoilers)
One of the things that I miss more than anything else right now is the Ultra Super Anime Time block that produced some really good variety with its half-hour block of various short-form shows. One of those was this series from studio Trigger that leaned easily into their other respective properties in a fun way. The series revolves around middle school student Luluco who lives in an area where aliens have immigrated and set up shop alongside everyone else. Her life is fairly normal in a lot of ways as we see at first with her father, allowing for the kind of comedy that Trigger did so well in Kill la Kill with design and exaggeration, combined with the sharp and brutal writing that lets Luluco really get under her father’s skin.

Of course, the show also shows us how bad and crazy things can be when her father accidentally eats something from the aliens ide that actually ends up freezing his whole body. That she shakes him so hard he falls over and shatters a bit results in some great humor with her panic and overreactions to it all. That has her going for help from the Space Patrol but it ends up being a situation that will cost a lot of money, hence being offered a job there to serve as an undercover agent to help out at school. It’s a “standard” setup in a lot of ways and you can see the way the structure is going to work in a basic sense. And it does work, largely because of the mixture of Luluco’s disbelief at what’s going on half the time and the weirdness of the situations. It’s an idea setup for Studio Trigger to work with to showcase their wacky side and an anything-goes kind of approach. It’s like Panty & Stocking without the overt sexuality.

The second episode beefs the cast up a bit with Luluco dealing with the arrival of a new transfer student named Alpha Omega Nova. Through his interactions with Luluco we get to see a bit more of how the city is and the kinds of weird aspects to how it’s changed since aliens moved in and how it became its own location separate from the rest of Japan due to all of that. Alpha, as it turns out, has been assigned to the police unit here the same as Luluco was and that means we get a fun little transformation sequence for him as well, which is a different kind of weapon that he gets to manipulate – which, of course, isn’t as rough on him as it is on Luluco in its design. There’s some fun in seeing how the two play off of each other since Alpha has a pretty intense side to him that’s mixed in with the boyish charm and good looks that makes quite the world-shattering impact on our Luluco.

The show has some fun in pairing them up because they are such different personalities and that has its own kind of enjoyment, which becomes a bit more complicated when Midori joins the show and provides for some tension and toying between them. Once the foundation is set, the show moves into its next phase, or season if you prefer as every three episodes seems to be its own season, as we get larger threats to Luluco’s home, the arrival of her mother as a space pirate captain, and a galaxy-spanning adventure that touches base with a certain group of witches that I think at the time revealed an expansion on that property. What allows the show to work, and is something that we talked about in our individual reviews when it aired, is that it just goes all out in a kind of wacky way that’s hard to describe in a sweeping way. Luluco and company end up in a lot of strange situations because it feels more like what you get out of kids comedies these days on Nickelodeon and Cartoon Network and the like than “traditional anime” in a way. It’s over the top, adheres to its own internal logic but bends it as necessary, and just has a screw it, let’s have fun approach to the whole thing. It moves quick and with precision but also with such a huge ass wink and grin at the audience that it simply delights even if you don’t get too invested in the whole family storyline for Luluco and her desired romance with the aloof and alien-like Nova.

In Summary:
Space Patrol Luluco is a show that I had a lot of fun with when it was small weekly doses and it holds up pretty well in a marathon session as well, which is a big plus. It’s the kind of project that definitely makes for some silly moments with lots of in-jokes and references for Trigger fans to enjoy a whole lot. Funimation’s release has fun with the dub of it as it should and they put together a good release in terms of how it looks and sounds. There’s not much in the way of extras, which feels like a missed opportunity when it comes to creating some new stuff for fans and just playing up the silliness of it all, but I’m just glad to get another short form anime series released like this. Definitely a must-have for Trigger fans and for those that like to laugh at something that plays the outrageous card without digging into the heavily sexualized barrel. 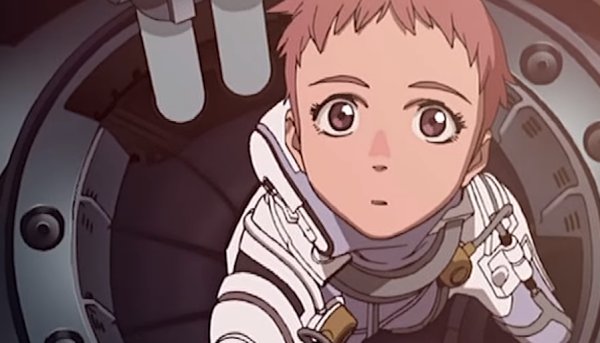