Under the guise of different clubs, a group of students lures in both boys and girls to become controlled sex slaves.

What They Say:
To the public eye, it looks like any other ordinary school; however, one club is secretly recruiting girls to make them their personal sex slaves and brainwashing the newly recruited males into enjoying one another. Which club is responsible for these demented activities, and how is it affecting the other clubs? One thing is for sure: the only thing that’s left is a dark and hopeless future.

The Review:
Audio:
The audio presentation for this release brings us the original Japanese language only as no dub was produced for it. The stereo mix, a linear PCM track at 1.5 mbps, is essentially what you’d expect from the show as it handles dialogue well and the few music pieces and ambient sound effects are well placed. There isn’t all that much in a real sense of directionality but it works for the content at hand. Dialogue is clean and clear throughout and we did not have any problems with dropouts or distortions during regular playback.

Video:
Originally released in 2005, the transfer for this OVA is presented in its original full frame aspect ratio. The materials for this release are in very good shape and overall it’s a good clean and very pleasing piece of work. It manages to avoid some of the softness that seems to be (intentionally) plaguing other shows that have been out recently while not going overboard with being too vibrant. Colors look good and maintain a solid feel while cross coloration and aliasing is, for the most part, a non-issue. The show hits some very low bit rates on average, down to 1.1 in a lot of scenes, but because of how it’s animated it looks good and solid throughout.

Packaging:
The front cover works a standard style design by having two of the girls from the show clinging to each other in something of an embrace as their uniforms seemingly melt away. Each is covered with plenty of juices and has the right look to them to really highlight what the show is like. The artwork is very well done with lots of detail to it. The back cover is a bit amusing in that below the summary they list “please be aware that there’s a small gay content in this film that might be disturbing to some viewers.” Don’t fear the lesbian intonations shown on the front cover, be afraid of the small gay content within! The layout of the cover is decent but text heavy with the summary and the shows origins. A few shots from the show are included and the remainder is filled out with the production credits and solid technical grid. No insert is included nor is the cover reversible.

Menu:
JapanAnime continues to have some of the smoothest menu transitions out there though the menus are fairly basic otherwise. Using the artwork from the front cover zoomed in, the good looking illustration works well here as you get to see plenty of the detail to it. The navigation strip along the bottom is simple but looks good. The menu selections are quick and easy to use and the transitional animation for them gives the entire menu process a bit of a smooth feeling. Access times are nice and fast and due to there being only one language, our player presets were a non-issue.

Extras:
The only extra here is the PSP/iPod video version of the episode. A menu section in the extras describes the method by which to get it in clear detail as well.

Content: (please note that content portions of a review may contain spoilers)
Every school and every grade have its own cliques and groups that form together and seem to hold sway over things. What you don’t see too often though is the groups and cliques that form behind the scenes with their own secret designs. Dark Future takes this idea and runs with it by having a group of students that essentially have a sex slave club. Only prospective members don’t know they’re about to be in it.

The show revolves a bit around the characters of Masa and Shion, two students who live together and are very involved with each other but are hiding it from everyone else. They don’t want people to know that they live together so they go to school at different times and don’t get too all involved during the day with each other. Shion’s your average cutie but Masa works in the newspaper club and he’s been following some stories about ghost sightings within the school. His investigations lead him to some of the areas in the building that aren’t used often or during normal class hours. That tends to let him see things that really shouldn’t be going on there.

At the same time that he’s investigating this, another school club of sorts using the cover of a Relaxation Club appearance is luring young female students to their room where they’re able to talk them into a relaxed manner and slip some mind controlling drugs into their tea. The women are then taken advantage of, deflowering if required, and having the other guys in the club have their way with them until they’re fully compliant with their wishes. But it’s not just guys running the club as we also see a woman named Sumire who has taken several male students under her wing to control them and make them her own.

Masa stumbles into this and tries to figure out what’s going on, which he needs to do since Shion is being approached as a prospective member. Add in a couple of women in the newspaper club and there are a lot of cute girls that can fall into the trap. Their designs, though young obviously, are quite good looking with some decent detail. The animation is simple but it manages to look good through the usual tricks and shortcuts, such as a slightly soft image and lots of very basic colors across wide spaces. For a show that’s playing within this rather overused genre, it looks decent enough and they do a good job of making the plot work a bit more by having it be a group of students orchestrating the sex slave trade rather than just one maniacal student.

The sex itself is something of a mixed bag though, bringing in some things that just don’t appeal too much to me. It’s definitely a hardcore show though, such as having Sumire’s scene where she’s on her period being serviced by her guys. One of the women that get taken into the club is deflowered and it’s just such a rough scene for so long that it turned to be fairly unappealing. The opening sequence with Shion and Masa started the show out right and was fun but it started to devolve after that. There is still some potential in future episodes with other characters though. And yes, there is some mild male/male material in here but that wasn’t something that bothered me. I’m far more likely to cringe to watching a girl lick blood and semen up at the same time than two guys going at it.

In Summary:
Dark Future takes a rather tried and true setup and works it nicely with some very mild enhancements. It’s not a stellar show but it has some decent looking animation, very good looking character designs and an approach that lets it work a bit better overall. Some of the sexual encounters, however, were not my cup of tea and left me wanting to look away from all of it. JapanAnime has done another good job overall, though as I’m able to see bit rates on discs once more I’m a bit concerned about how low they encode the video for their shows, especially considering there’s only one episode here. 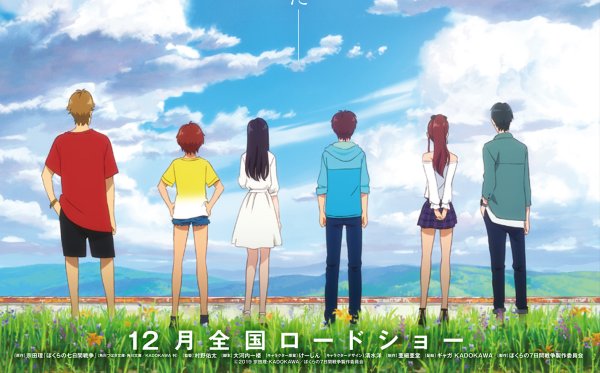