The Sex Taxi’s coming to town and he’s going to pick you up!

What They Say
Who will be the next fare? What lonely woman can resist the forbidden thrill in the back seat of a taxi cab? As the taxi cruises the back streets what illicit acts could possibly be taking place in the shadows?

The Review:
Audio:
The audio presentation for this release brings us the show in its original Japanese language track in stereo encoded at 192kbps along with the English language dub done in the same form. The show is almost entirely dialogue based other than the sounds of the car coming and going and the music so there’s not exactly a lot to really go by here for directionality. The track is nice and clear though and we had no problems with it in regards to dropouts or distortions during regular playback.

Video:
Originally released in 2002, the first two OVAs in the series are presented here in their original full frame format. The transfer in general looks beautiful with its lush colors and fluid animation sequences but some problems do crop up. During several panning sequences you can see some rather visible cross coloration getting into the tight line work and some aliasing occurs during similar pans up and down. Barring that, which isn’t all that distracting from the bulk of the show, the transfer looks really good and is a pleaser in general.

Packaging:
Going heavily with the taxi theme, we get Satsuki in the back seat of the taxi with the drivers’ hand reaching down for her fare. It’s a good looking shot and the quality of the artwork looks great. The logo used for it also works really well with the heavy pink emphasis mixed in the black and white checkerboard standard. The back cover is very heavy on the pink with a summary and a few pictures across it while a black and white checkerboard along the left brings in various character facial shots. The discs features and technical information is all nice and clearly listed. The insert takes the layout of the back cover and adds in the logo from the front as well as the chapter stops.

Menu:
The menu uses a variant of the front cover by taking Satsuki and putting an actual taxi around her so she’s a bit more obscured by the frosty window. The selections are lined up along the window at an angle and some of the instrumental music from the end sequence plays along to it. Access times are nice and fast and the layout easy to navigate. The disc also properly read our players presets for language.

Content: (please note that content portions of a review may contain spoilers)
Sometimes the taglines are just too funny. “It’s a long, hard road ahead” highlights the back of Sex Taxi and I have to give it props for not only making me laugh but being accurate at the same time. Sex Taxi takes two of America’s favorite past times, sex, and cars, and melds them both together.

The show focuses on a taxi driver who’s recently started up in a new town. Reflecting on his last town, we see the many conquests he had where he’d find a way of getting dirt on various women and use it against them so he could blackmail them into doing whatever he wanted. Then he’d take them to various places where he and his friends would have his way with them. For reasons undisclosed, he eventually left there and started up where he is now and the show follows him as he searches out the various new targets that he’s going to go after. He’s got a particular taste for high-class college girls in uniforms and this town seems to be filled with them.

The driver, who is nameless and relatively faceless as we never see his eyes as they’re obscured by the shadows of his cap, picks up only his targets and says and does things so as to pull out useful information from them. Since people tend to ignore taxi drivers in general, they’re more revealing about things and he uses that to his advantage also. When he picks up Satsuki, an attractive redheaded daughter of a well to do businessman, he stalks her out and gets a variety of incriminating pictures of her. When revealed to her, she, of course, agrees to do anything to get him to destroy them.

The same happens with a pair of twins, Rena and Sena, of whom one of them is indeed in love with the other. His plans work in much the same way in gathering information and then using it against them so that he can take them to the abandoned school building he’s using as a hideout for his activities. The sex scenes within the two episodes are pretty nasty in their own way. Beyond the obvious of not being really consensual even though they agree to it all, there’s the element of bondage and submission to them as the driver controls them and does whatever he pleases with them. One of them gets treated extremely roughly with a bow and arrow set that goes into the painful direction. There are some really good moments throughout both sex scenes but some of it just gets into the cringing areas once in awhile. 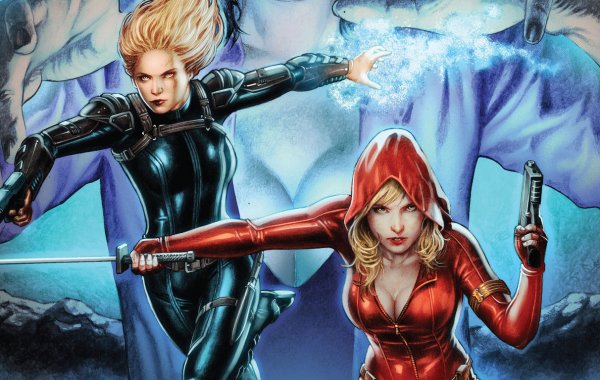