Sentai Filmworks has lined up their plans for the month of August 2017 with what they’re bringing out and there’s definitely a lot to like. The month sees one re-release with a first-time Blu-ray for the Honeycomb season of Hidamari Sketch while everything else is new.

Food Wars gets a complete first season release and a limited edition with some sweet swag. Even more impressive is that the thirty-nine episode Ushio & Tora complete series is getting the same treatment!

This month also sees the release of Bakuon! with a straightforward complete collection that’s in Japanese with subtitles only while the Beyond the Boundary movie release gets a bilingual presentation. SYNOPSIS: Studying at the Yamabuki Arts High School has been a dream-come-true for Yuno, and she’s learned so much already! Not just from her instructors, but from the friends and neighbors who’ve become her second family and made the Hidamari Apartments such a safe and nurturing home. But as the day of her “big sisters” Sae and Hiro’s graduation draws slowly closer, it’s time for Yuno to start seriously taking on the same role for Nazuna, Nori and the other budding young artists who’ve entered Hidamari’s protective cocoon. And it’s also time to tackle some really challenging artistic assignments. That doesn’t mean there won’t still be time for fun with Miyako and all the others, but it’s definitely time to pencil in her plans for the future. And sometimes that means putting the art before the course! Prepare to be drawn in once again as the magic that surrounds Hidamari continues in HIDAMARI SKETCH X HONEYCOMB – The COMPLETE COLLECTION! SYNOPSIS: Ever since he was little, Soma Yukihira’s main goals have been to beat his father in a cooking contest and take over the family diner. That’s why, when his dad suddenly announces that he’s shutting the restaurant down and sending Soma to cooking school, Soma is shocked. However, Tohtsuki Academy is no ordinary cooking school. This elite institution is filled with culinary giants like Erina “God Tongue” Nakiri, who does her best to keep a lowly short-order like Soma from even making it inside the door. However, if the snobs can dish it out, Soma can serve it up, and when he learns that only a handful of the students manage to graduate every year, he swears that the only way he’ll leave is as number one in FOOD WARS! SYNOPSIS: Riding a bicycle may be better than walking, but when another girl zips past her on the way to class, Sakura Hane realizes that there’s an even better option: motorcycles! Fortunately, Sakura’s all-girl school just happens to have a motorcycle club! It only has one member though: the mysterious Raimu Kawasaki, who’s never been seen without her face-obscuring helmet. But that changes immediately once Sakura and the girl who passed her, Onsa Amano, sign up and start recruiting! It won’t all be easy riding… Sakura still has to earn her license, and there are problems like the club’s official status having slipped, and the need to recruit a faculty sponsor. But when the rubber hits the road, those are just little potholes as six student bikers take a ride on the wild side in BAKUON!! SYNOPSIS: Can anyone outrun their past forever? Mirai Kuriyama’s ability to control and manipulate her blood, even to use it as a weapon, has left her an outcast and pariah. But a chance encounter with Akihito Kanbara, whose own lineage is only partially human and allows him to heal from almost any injury, may have finally given her a chance at finding peace. When the cost of that path becomes apparent, will the two of them be willing to pay the price for a true happy ending? Even if it’s achieved, how long can it last in a world where Mirai’s mere existence is seen as a lethal threat? In two spectacular feature films, the world created in the hit series is taken to its epic, stunning conclusion: BEYOND THE BOUNDARY -I’LL BE HERE-: Past and BEYOND THE BOUNDARY -I’LL BE HERE-: Future! SYNOPSIS: Ushio always ignored his father’s crazy tales about the temple where they live. All that talk of restless souls and vicious monsters are nothing more than stories, right? However, Ushio quickly rethinks his position when he discovers a locked basement with an actual demon pinned to the wall by a spear! The tiger-striped demon threatens to eat Ushio if he doesn’t free him, so Ushio naturally chooses to ignore him. However, when the demon’s presence starts to attract others, Ushio is forced to remove the spear to save himself. To make a bad situation even worse, freeing the demon, Tora, also bonds Ushio to the cursed Beast Spear, sending him on a journey where unspeakable dangers await. The battle is only beginning for these unlikely partners in the all-new USHIO & TORA! 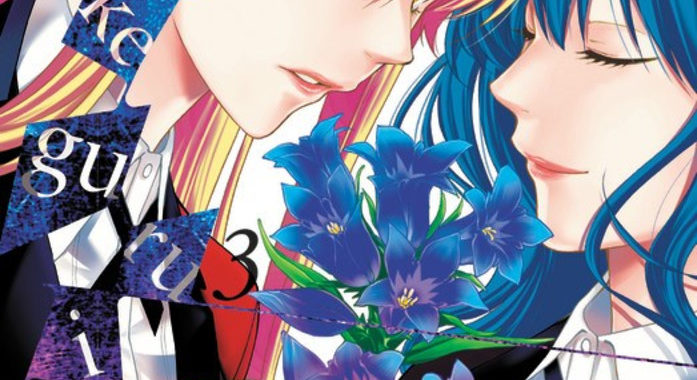