What They Say:
Luffy meets an unexpected acquaintance from the past, Bellamy, who seems to be up to no good! Meanwhile, Caesar Handover Team encounters a snag when they learn just how dangerous Green Bit is! Meanwhile, on the Sunny, the four who remained to watch the ship get a fright as they discover – they aren’t alone!

The Review:
Content: (please note that content portions of a review may contain spoilers)
One Piece brought in some fun new characters the last time around with a look at a Red Sonja type that will likely prove to be an ally for Luffy as time goes on. But the one thing that came in that seems like it may be a bit of a game changer for part of the story is that Luffy ends up coming across Bellamy, someone we haven’t seen in years. He knows Lucy is actually Luffy and is a different man than he was before, more intense and he feels like it’s a bit more powerful physically as well. There’s a confidence and threat about him, one that he plays well just by his presence and words, especially as he toys with Luffy in saying he made his way to Skypiea and may or may not have done something there that would leave the place dealing with a problem. That gets under Luffy’s skin easily considering his time in Skypiea and what they learned there.

The first half of the episode works through showing us where a lot of the characters are as they’re moving about with some, like Law and his group, gaining useful bits of information in talking with all sorts of people. They’re starting to see more threats are rising around the world from particular military style groups that are even more formidable than CP9 was, which is saying a lot considering they could call in a Buster Call, but it’s all around the edges kind of threats at the moment. Kin’emon gets his time as well as he races about and ends up getting caught up with some goofy looking guys threatening him as they know where Kanjuro is but they want something from him. Well, beyond his death that is. It’s not a huge bit of progression for that part of the story, but it’s the nudge it needs to start gaining its own direction.

Other events moving forward include seeing a bit of the next gladiator match that’s getting underway, which Luffy has a prime view of, and seeing more of Sanji and his new apparent girlfriend as he’s all swooning over her and the attention she’s giving him. We even get a bit of time back on the Sunny, which is definitely cute as Kine’mon’s kid is able to get some serious lap time with a maternal Nami, something that Brook tries to do as well only to get his bony rear kicked .Seeing Chopper and Brook try and analyze Momo is definitely fun since it does have something to reveal, but it’s also just plain fun to watch Nami being so cute with him. There aren’t a lot of big moments here, none really when you get down to it, but it does advance a lot of little things nicely and all works towards introducing us to someone new at the end who could be important for at least this arc.

In Summary:
One Piece doesn’t have a significant episode here with what it does, but it is nudging along several stories and bringing in little bits of information. The material with Bellamy at the start is probably the most interesting overall since it speaks of larger things to come, as does the hints we get from Law’s information gathering reveal, but even that feels a bit minimal overall. There’s a lot of good small moments here but nothing that really grabs me and says what’s truly important. But those threads are starting to come together and you can get that sense pretty well that we’re once again going to have multiple stories converging here in awhile. 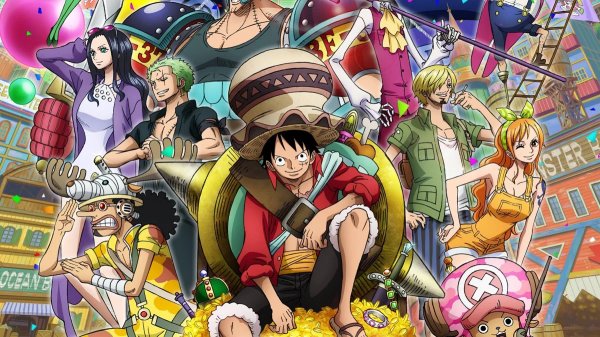