After an unprecedented period of growth and prosperity, humanity is in a severe state of decline—population is at an all-time low, food is scarce, and remnants of a technological past serve more effectively as countertops and paperweights than they do their original purposes. Meet the new humanity—manic-depressive fairies with morosely skewed dispositions and supernatural technology who do just about anything in the name of fun and sweets—and the young woman whose job it is to mediate a sane coexistence between her dwindling breed and their tiny successors.

What They Say:
For years, declining birth rates have forced what’s left of the human race to cede more and more territory to other beings who’ve appeared to take advantage of the emptying ecological niche. Now only a handful of humans remain among the remnants of civilization and Earth is dominated by faeries… tiny ten inch tall creatures of surprising intelligence. But humanity’s importance isn’t over quite yet, as young Watashi learns as she makes the decision to return to her hometown and assume her grandfather’s position as an arbitrator between the races. Unfortunately, the job isn’t going to be anywhere near as simple as she expected, and it’s going to take wisdom far beyond her years to achieve her most important mission. It’s not about how often you fall and fail, it’s about how often you get back up and try again, and the human race still has a lot left to accomplish in HUMANITY HAS DECLINED.

The Review:
Audio:
Bare basics here; Japanese 2.0 audio track presented in Dolby Digital is every bit what I remember it being when the series was streaming. And while 5.1/7.1 isn’t really called for, there are certain scenes in which it might’ve enhanced the experience. That said, it’s really a shame this title did not get a dub. I can imagine several American VAs perfect for the roles for the fair folk and mediator.

Packaging:
A standard keep case safely holds the three discs which comprise this release. The first two discs are on a center flip tray, while the last disc snaps into a hub on the inside of the back cover. Nothing else is included.

Menu:
Per disc, each menu screen features a still frame representing one of the arcs included on that disc. Depending upon section (Main, Features), a different portion of the pop rock tune “Real World” by nano.RIPE, as featured in the show’s OP, loops in the background. Special mention is due to the choice of Main Menu cursor, which fans of the show will recognize instantly and get a good chuckle from. Navigation is facilitated via contrasting colors for item selection.

Extras:
Disc 1 offers Sentai Filmworks previews and DVD credits. Disc 2 features the not-to-be-missed bonus arc, Survival of the Fittest, which is comprised of 6 short episodes. Disc 3 offers Story Digests 1–4 (superfluous but quick recaps of story arcs) as well as the clean versions of the all-too-danceable OP and, by Masumi Itō, the Yume no Naka no Watashi no Yume (My Dream Within a Dream) theme-backed ED.

Content: (please note that content portions of a review may contain spoilers)
One of my favorite Summer 2012 simulcast titles, Humanity Has Declined (Jinrui wa Suitai Shimashita), is a fun and relentlessly surprising watch. The more I revisit this series, the better it gets. That said, it is almost impossible not to get mired in over-analysis while reviewing this show specifically because of how good it gets. For all these twelve episodes accomplish, however, it’s easy to overlook what’s most important: the fact that each arc is stuffed to the gills with comedy. Laughing at and condemning the conditions that have given rise to the chance for this show to be poignant, as well as knowing who those viewers are that will appreciate the tongue-in-cheek topical humor, is the show’s forte, but scripting a dire situation which can be exploited for the purposes of mocking expectation and consistently eliciting belly laughs from a general audience is a very special talent indeed.

Populated with puns, pop culture references, and industry in-jokes, Humanity Has Declined (based on a light novel series written by Romeo Tanaka) comprises seven short tales of no more than two episodes each. The tales are not presented in a linear chronology, but all of them focus on the mediator—the main protagonist/heroine (who, while never actually called by name, is credited as Watashi or refered to as Ms. Sweets/sweets girl)—at different points in her life and career dealing with both old and new humanity in varying degrees and circumstances. As insular as some of the jokes might be, by and large the humor is widely accessible and will especially agree with those who have darker tastes. Scour the Internet for this title and Google will pull up ani-blogs citing sacrificial suicides by slices of bread; camera-shy, genetically modified, megalomaniac oven roasters; anthropomorphized, amnesiac satellites… the list goes on.

The dark humor is, interestingly enough, contrasted (if not highlighted) by the choice of colors. The use of pastels for landscapes and characters makes the visuals reminiscent of fairy tales (get it?!), distinguishing the series from the cliché palates present in all too many oppressively despondent, post-apocalyptic sci-fi shows. Furthermore, the color scheme exemplifies the sugar-coated layering which gives this series its complexity. And although it ultimately comes across as sardonic and pessimistic, Humanity Has Declined is certainly not lacking in the feels department. The last tale offers a touching ending that negates the hitherto proffered disheartened tone by concocting a particularly sympathetic moment which very nicely shows (not over-narrates) why Watashi becomes a mediator. Of course once viewers realize that their emotional fulfillment stems from having been thus satiated at the end of the series by what, in reality, is its beginning, the fact that that positive emotional note takes place before everything else should (appropriately enough) dilute that warm fuzzy feeling.

While the visuals are a huge factor in not only portraying the surreal state of the world as wrought by new humanity as well as old humanity’s estrangement from its own agricultural past, the voice acting is key and spot-on in evoking the distinct dualities which define each humanity. Fairies speak in childishly innocent, high-pitched, squeaky voices (through static, painted-on smiles) even when obsessing over such topics as starvation and failed social revolution. Old humanity carries on with itself, as it always has, via placating tones of subservience despite harboring resentment towards the actions and dissonant natures of others. To pull all of that off (at least to my ear, which knows nothing of what words are being stressed in Japanese) is a phenomenal feat and deserves much applause.

See what I mean? Mired. Don’t let my long, twisty sentences and sophistry put you off though. Humanity Has Declined is not an anime that should be passed over. It’s important because it’s social commentary. It’s important because it’ll make you laugh. The world needs perspective and humor equally to survive, so pick up this series on DVD/BD! Each time you do thereafter you will thank yourself.

In Summary:
Any show that gets better upon subsequent viewings, especially when there’s an Endless Eight-esque arc embedded therein, is a keeper. Even once the shock value of the warped sense of humor levels out, the way the jokes are written, timed, and delivered will continue to reap involuntary belly muscle contractions no matter how many times each episodes plays. Past that, there are several layers of social commentary to dig your teeth into and many background elements that can be easily overlooked that are wonderful to catch the next time around. Plus, the whole series is just very pretty to look at and provides a nice break from the standard anime color palate. Go watch now! You know, before humanity actually declines. 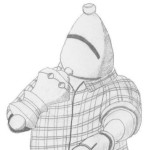