I had a wonderful winter break with my family. The highlight was getting to spend some time with my new baby niece – Sonja. With me as her aunt, there’s a huge likelihood that my little darling will become part of the next generation of fangirls.

In many ways, it’s a good time to be a fangirl. When I was a wee little thing, I identified as a “boy geek” because I just didn’t know any other girls with my interests. Now we have sites like Her Universe that specialize in women’s geekly attire. Her Universe is even celebrating the Year of the Fangirl! We have blogs and Tumblrs run by women who love Star Wars. We have crafters like GeekabyeBaby who specialize handmade items for babies, children, and women.

Of course, we still have a long way to go. In May, Think Progress reported that we’ve hit a five year low in Hollywood top grossing movies. In June, NPR ran a story about the serious lack of women’s stories in movies. Since then, we’ve had Hunger Games and Frozen.. but the trend is still troubling.

What do I wish for Sonja, and for other little girls who will emerge as our future fangirls? Many of my thoughts branch out beyond simple Star Wars wishes, but I’ll focus on just that for today.

Range of Roles:
Sonja deserves to see women in a wide variety of roles when she’s old enough to jump into the movies. While the original trilogy and the prequel trilogy each had a strong heroine, it’s sad to realize that’s really all they had. We did get an awesome female villain in The Clone Wars with Ventress, but overall fangirls get just one “strong girl” in each Star Wars story. Where are the women as mentors? Where are the women on the Dark Side? Women occupy every possible role in our own society, so why is it so hard for Star Wars movies to reflect that?

More than 20%
The Geena Davis Institute on Gender in Media reports that
“Even among the top-grossing G-rated family films, girl characters are out numbered by boys three-to-one. That’s the same ratio that has existed since the end of World War II.” (please use inset quote) http://www.seejane.org/research/ Their research also shows that in group scenes often only 17% of the crowd is female. Consider the original trilogy – where only 1 of the main characters is a woman. Take a careful look at the crowd scenes. Did things really improve much in the prequel, even if you count in the little cluster of “Padme’s handmaidens”? Let’s see these new movies make an effort to get the actual representation of women closer to the real world. Let’s also see them have more of those women actively engaged in the story, with speaking parts and everything! Our future fangirls deserve to see themselves reflected in the stories they love.

Toy Marketing and Selection
Sonja deserves to have action figures and toys that appeal to boys AND girls. These toys must include the girl characters we love from classic Star Wars, the prequel trilogy, Clone Wars, and the any upcoming story lines. As an adult, I get angry when I browse the toy aisles of every store and see almost no female characters. On my most recent trip, I was just hoping to find a Leia figure to use for some photos, since I left my Lego Leia at home. I would have been satisfied with an Ahsoka, or a Padme. I was even willing to buy a reasonably priced set of Legos to get a figure. All I found was a single Black Series Leia… in her metal bikini. Are we seriously convinced that no one will buy action figures of our favorite ladies? I’m a little bit over the argument that, “marketing must not believe they will sell.” My niece, and all the other little girls who love or will love Star Wars deserve to have action figures of their heroines. It wouldn’t kill the boys to have an Ahsoka or Leia in their play sets, would it?

Some days I feel like we’re taking major strides in the right direction, and some days I just shake my head in frustration. The Force can flow through boys AND girls. Let’s be sure we are welcoming and encouraging everyone in this newest generation of fans.

Until next week – Happy New Year and may the Force be with you. 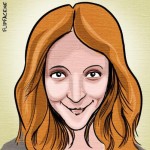