Skip to content
Let’s get the old band back together!

What They Say:
L-elf tries to infiltrate the enemy position but is caught by A-drei. A-drei wants him to help take out Captain Cain. In the meantime, Haruto comes back, but his memories are fading away as he continues to fight in order to expose the lies of the world.

The Review:
Content: (please note that content portions of a review may contain spoilers)
We’re already at the penultimate episode of the Valvrave series, and while it feels like there’s been a lot leading up to this point, there’s still so much to cover that it’s a little surprising to have only two episodes left. The previous episode took more time than expected for exposition considering this, but it served its role, and there’s clearly nothing holding this show back from completely cutting loose and speeding toward its finish line, without it feeling like as much of a rush job as that sounds.

Fortunately, it does so quite well, spending an appropriate amount of time on each of two main plot threads and working in minor ones to touch upon all the characters we’ve formed any attachment to, all building toward a climax that was in no way unexpected but also works very well to allow for what looks likely to be a more satisfying finale than I would’ve expected at any point in the series. Even with as much as this episode accomplishes, there’s still a great deal more for the finale to sort out before we can realistically reach the epilogue we’ve seen flashes of throughout the series, but this episode was a good indicator that it should work out pretty well.

As should be expected for the endgame preparations, the stars of the two plot threads are the two leads who had worked out their differences last time to plan for that whole truth-exposing system we’ve heard so much about. L-elf gets the focus first, ironically making it all the way through the series only to find it in his best interest to team up with his original comrades for almost the opposite of their original mission. I’ve expressed my interest in how the Karlstein soldiers have been developing in this second season, and having them come full circle to see that L-elf’s betrayal was actually the right decision all along and reforming the team that, despite its issues of morals and cooperation, displayed a great deal of camaraderie from the beginning.

The other main piece to follow is of course Haruto himself, meeting back up with Shoko and the rest of the Module 77 humans who chased him away. The impact of Shoko’s revelations from the previous episode are felt in a big way here, and seeing her hide it to try to keep the peace was a good character moment for her. In some ways both fortunately and unfortunately for Haruto, his loudmouthed and naïve companion within the Valvrave doesn’t understand what not to say, and so he learns what we saw, letting him appreciate her act but also lament her struggle.

And then it’s off to battle, and those truths can only be exposed by exposing the lies in front of the world. It’s an ending that lets each character contribute their unique touch to help out, and it gets exactly the reaction intended. There’s a lot to work out from this point, but the protagonists’ job has likely been largely finished, as it’s now up to everyone else to figure out where to proceed.

In Summary:
Despite only having two episodes with so much left to cover, the penultimate episode works out quite well, and even sets up the finale so well that it will almost surely be better. There’s no telling exactly how it will turn out with quite a bit still left, but this leaves it off on a very optimistic note. 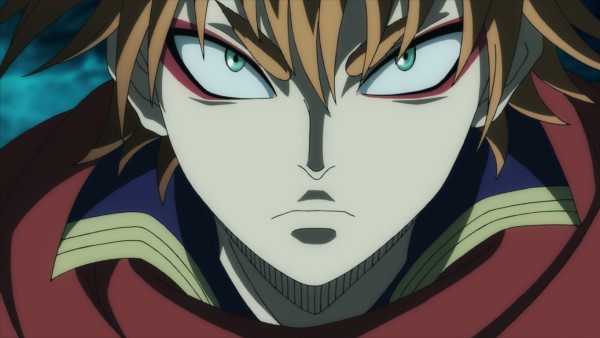